Why you should use Facebook adverts for your business

When people think of advertising, quite often it involves pouring a wad of cash into a hole. Casting out a giant net, and you might get a few bites. While you could spent thousands of dollars advertising on the radio, TV, billboards or newspaper. The problem you have is that only a small percentage of the people who view your advert are actually interested in your business.

What if there was a way to only advertise to those people that you’ve identified are your target market? That’s where Facebook adverts come in.

Facebook adverts allow you to specify exactly who sees your advert. You can rest assured that every person who views (and clicks on your advert) is money well spent.

Here’s two examples of how Facebook adverts can benefit your business.

Brady Dyer is a Wellington-based wedding photographer. He wants to advertise to potential wedding clients. So what do we know about his target market? They’re going to live in Wellington. They’re more than likely going to be over 18. Most of Brady’s enquiries are with the bride-to-be, and most importantly there relationship status on Facebook is ‘engaged’.

By working out who his target market is, we can then design an advert that truly targets the people who will see it. We’ll include a photo of a bride looking beautiful, and text and plays with their heart strings.

You can see below that the audience for this advert is only 4,040 people. Because he knows every single one of those people are the exact people he wants to see his advert, he’s more than happy to pay to attract them. 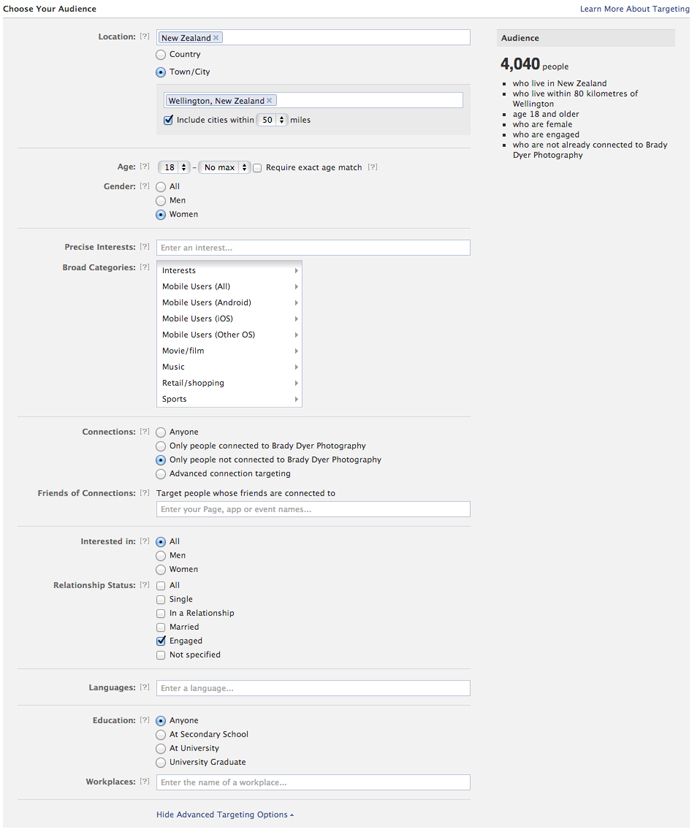 A second example might be a new chain clothing store that’s opened in town.

We’ve established from our market research that their clientele are female teenagers. There’s not much point in advertising to people who live a great distance from the store, so the area is very specific.

By setting a daily budget, and a total budget for the campaign, there’s no surprises up front, you know exactly how much you’ll be spending, and most of all every one of those dollers is money well spent, and more important well targeted. 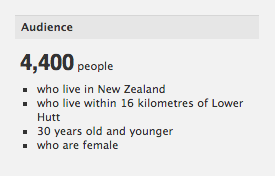 So if you think Facebook advertising sounds like the way to go, get in touch with us. We can help design your advert, target your audience, and get you a heap of new customers.