Why we love MailChimp & Chimpadeedoo

We love MailChimp! We set it up for nearly all of our customers for a number of key reasons:

This is a case study MailChimp recently posted on their website about the success of Chimpadeedoo.

Delighted with Armin Ghazi’s results, Ben suggested I reach out to him to get the full story. Ghazi used to run a Monkey Joe’s Parties & Play in North Carolina. While there, he set up a MailChimp account for the establishment, and eventually decided to strike out on his own, opening an IT consulting and email-marketing practice.

Apparently, Monkey Joe’s is just in this guy’s blood, and as such, Ghazi soon began consulting for a Nashville franchise. About a year ago, he suggested they set up an iPad with Chimpadeedoo to help grow their list. They’d been using MailChimp to stay in touch with their customers, but their existing system for signups, to put it bluntly, simply wasn’t cutting it. “Normally, at the check-in counter, all guests fill out and sign a dead-tree waiver for the kids who will be playing,” Ghazi explains. “At the bottom of the waiver, underneath all the guest’s contact info, is a line for their email address. I’d estimate about 40-50% of all guests write down their email. Of those, about half are legible to the easily-distracted teenager charged with typing them into a spreadsheet every week or so. Of that portion, probably 25-50% are entered incorrectly [due to] misspellings, syntax, etc. Add in the time delay of getting a guest into the system—a week or more—and the fact that there’s no indication on the waiver that their email will be used for marketing, and, well, you get the idea”

The Nashville Monkey Joe’s got an iPad, set up a custom skin, purchased a Griffin stand and a Se-Kure security tether. Since then, a new Monkey Joe’s opened in Nashville in mid-2011, and they installed a Chimpadeedoo’d iPad there as well. “Guests love it, because, ‘Hey, cool, it’s an iPad,’” Ghazi says. “Employees love it because they don’t have to deal with data entry. Owners love it because it’s more reliable and much more effective than the old way, and I love it because everyone else loves it. Can’t really go wrong with that.”

Here are the skins they created: 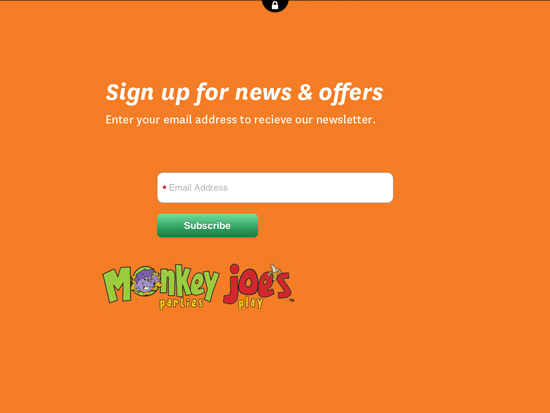 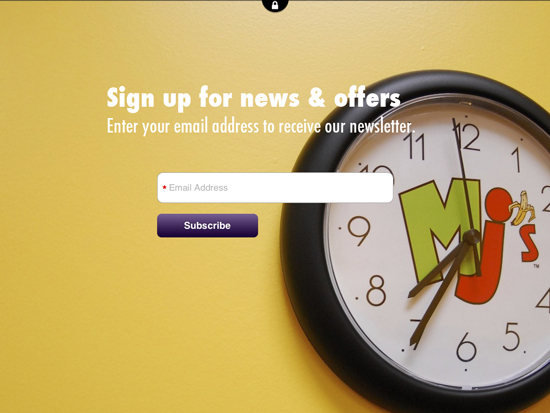 I asked Ghazi for some numbers (We love numbers at MailChimp.), and he was happy to oblige. When the first Monkey Joe’s opened in December 2010, they had a rather stale list of around 250 customers. When they started taking their email marketing seriously, the owners set a goal of getting 5,000 folks to sign up by June 2011. That goal was accomplished in April, thanks in no small part to Chimpadeedoo. They hit 7,500 by September and 10,000 by December. Crazy! Ghazi says they encourage their readers to interact with their campaigns by including a coupon in every email. We’re just pleased to see monkeys and chimps getting along so well: 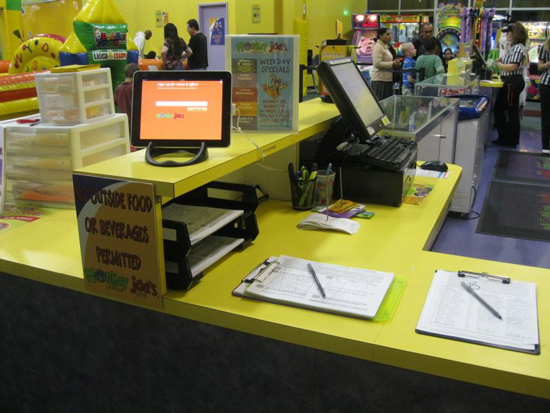